The 33rd running of the West Highland Way . June 24-25th 2017
Start Time 1am
This year the race attracted 24 runners for other countries. 18 of whom finished. I was one of
them.
159 finishers,  from 210 starters.
The lure of the Highlands was on my mind for many years. 5 years ago I had learnt about this
race. During the last 3 years I knew it would happen soon. I travel home every 2 or 3 years. I
was feeling this was the year to run since it had been 3 years since my last family trip.
I am originally from Manchester, UK and so my family where more than willing to help me and a
couple of running friends one I knew from high school.


Training felt tough this spring and I knew I would have a battle at West Highland Way. I
prepared with a lot of hill climbing, with the course having over 14,000ft of elevation gain. I
would do my training different if I was to train for it again. Even though I found a lot of the
terrain hard to run out there, there was more than enough runnable sections too. So much so
that I burnt out of all the running we were doing early on and something happened to my calf's. I am used to a much more slower start :) 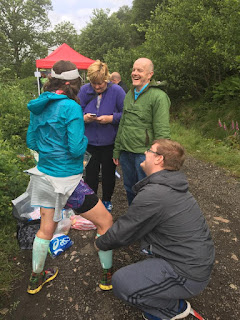 They got worse as the race went on and got tighter and tighter that I would be hobbling
out of the checkpoints till they got warmed up again. Over half way I was in trouble not even
being able to run some of the flats. I could do alright on descents though. So next time I would
add more running flats than climbing. 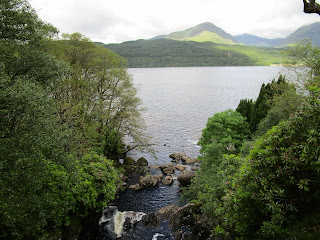 This will be a race to remember, I even enjoyed most of the rain. Just over half the course we
had perfect weather. The breeze kept the midges away (biting flies) that are common in
Scotland this time of year. You are humbled by the mountains and lochs, there beauty and size really opened your eyes to how lucky you are to have this day and be here in the shadows on
the great highlands. There bareness showing you all the shapes of the ridges and hollows adds
such a dramatic landscape. 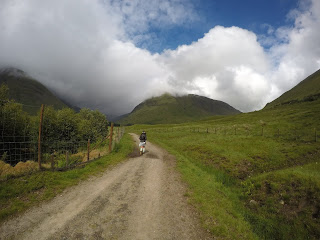 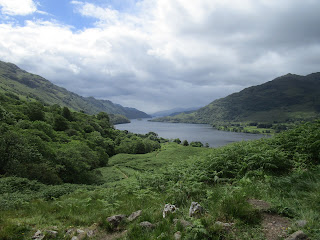 Adding to the green landscape a scattering of rocks on the hills and many,
many waterfalls everywhere you look. 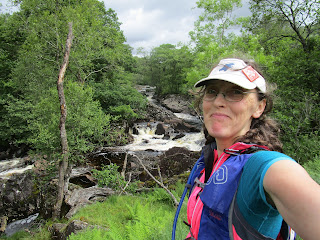 Clouds filled the sky and added an ambience to Scotland
that the weather can quickly change. They added to beautiful scenery and made it more
magical. It couldn’t have been any better. The landscape filled my heart and I knew I was here
for a purpose. I would run all the way through from Milgavie, Glasgow to Fort William for 95
miles and provide hope and inspiration to those around me that more is possible than you think.
There are always moments of some struggling but in the end there are bigger outcomes on the
other side.. 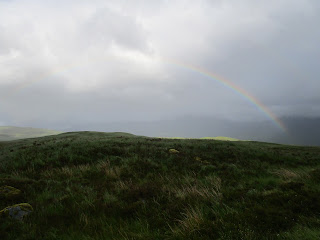 My family knew I would do it but for them to see me doing it was a greater
experience and a realization of things that are possible. It provided my runners with inspiration
and a hope to one day be stepping foot at the start of The West Highland Way. It excites me to
think I have provided them some insight and add to their running enjoyment and experiences.
I think if I did it again a change of shoes like Hoka's would help on some sections. These
sections caused my feet to become very sensitive.


Plenty of rocks around the trails especially
from Rowardennan to Beinglas Farm, but the 2nd half of the race is more dirt road where the
rocks are more packed into the trail, where softer cushioned shoes would be a huge benefit.
Coming into Glencoe is where the cold wind and rain really started to bite. Coming down into
the valley the wind was blowing you over to the side of the trail. It took only seconds to start
feeling the chill as we stopped at the Glencoe checkpoint (Mile 71) when the medical support
asked me if I was cold and I said ‘no’ after just descending, it was only seconds later than I was
shivering and my support runner Dominic was putting a thick fleece type wind breaker over my
head. Which I ended up refusing to take off. 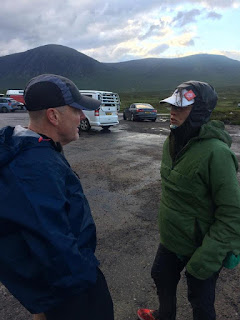 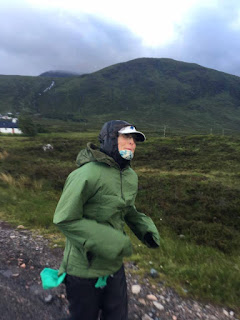 It wasn’t till an hour later when I realized I might
have taken his only coat. My sister had warm oatmeal waiting for me and I devoured it.
I left Glencoe with Vicky and I felt rather disappointed I couldn’t run too much since I know how
much she loves to run! Dominic would join us again later on. Great thing is you can have as
many runners as you want at one time with you at West Highland Way! The wind out of
Glencoe was hitting us straight on causing us to get blown around. Nice thing was when we
turned to climb Devils Staircase it was behind us but I was still very slow. Every know and then
Vicky asked if I was okay as I stopped to catch my breathe. 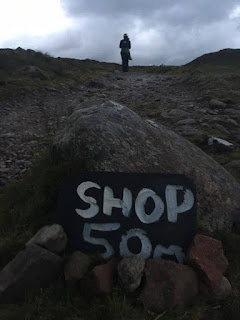 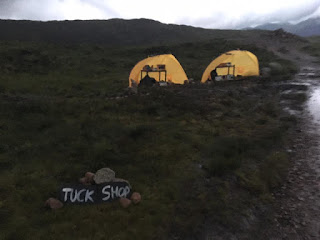 The climb was over quickly and we were pretty amazing at the tuck shop at the top of the mountain!

We had a long, long descent into Kinlochleven where Dominic had backtracked from to meet us. I
feel I would have gotten lost there if he hadn’t have met us.
Soup was waiting at Kinlochleven and I devoured that as well.. Another slow cranky climb out of
Kinlochleven, and I had to make clothing adjustments as I was warming up. This was a long to
the final checkpoint and some of the worst of the weather. It was dark, driving rain and 40 mph
winds, tiredness hit me and blurred my vision sending me stumbling around. It was hard to look
ahead because of the rain and wind sending me in a straight path through whatever came at
me. The dirt road here had plenty of loose rocks, many stream crossing and felt like hiking up a
creek for most of the time. There were lights way in the distance, I felt lost after becoming so
used to confidence markers, and was almost in tears but then realized my support runner
Dominic had his GPS route and felt better.
We stopped by the medical wilderness team who were out in the middle of trail in the middle of
the moors and they asked if we were doing okay. There were a couple of runners he would
later make an emergency foil vest for them as they went on to finish..
Soon we were waking up my sister Tracey and Scott who I later found out had a very tough
drive to find this final checkpoint. I couldn’t be more glad that they met me there. I had 2 cups of
hot chocolate and some custard for breakfast. The final leg of the journey began with an easy
climb but mostly a descent into Fort William, the rain was on and off now and once we got to the
dirt road downhill section for the last 2 or so miles I surprised myself into a run and passed
several other runners.

I do wish I had pushed for the 29 hr finish but I am super happy with the
whole experience and maybe one year I can come back for it?

If you are thinking about doing WHW you should make it happen. The highlands await you and
will humble you and the West Highland Way Family will welcome you and take care of you. 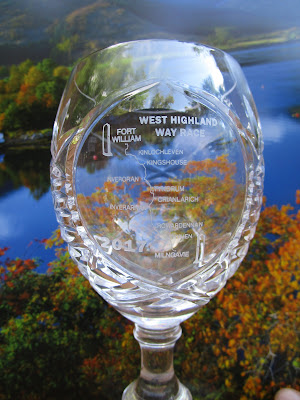